How Does Mental Toughness Fit With Psychopaths, Narcissists and Machiavellians?

I remember the first time I saw Doug Strycharczyk speak, he fielded a question about The Dark Triad of Psychopaths, Narcissists and Machiavellians and how  might their behaviour fit with someone who is extremely mentally tough as per the MTQ48 mental toughness framework. Doug is Managing Director of AQR and, in my opinion, one of the Rock Stars of Mental Toughness, and whom, along with Professor Peter Clough and others, has developed and commercialised the measure. I found his answer fascinating and since then have wanted to publish his response below. Thanks Doug and ‘take it away’.

The Dark Triad is a concept, which is growing in importance in business and in society. In recent years researchers have variously suggested that these characteristics are linked to some form of success for people – often those who get to the top of the business or political ladder.

The Dark Triad describes three traits, which are often seen as malevolent in nature. These are:

The first thing to understand is that these are normally distributed in the human population – we all have low, medium or high levels of each of these.

So, although these are often linked to undesirable or anti-social behaviours such as dishonesty, deception, impulsiveness and impetuousness, they are also often associated with charming behaviour, superior negotiating and influencing skills and with strong ambition.

These are often appealing in recruitment and development activity, which is why it is hard to detect those who are “possessed” of high levels of the Dark Triad.

Several studies including one recently led by Daniel Spurk of the University of Bern, have concluded that there is indeed a clear link between these three traits and career success and higher salary. Oxford University psychologist Kevin Dutton, author of “The Wisdom of Psychopaths” argues that psychopathic traits are common in successful leaders and in fact may help them do their jobs.

Also three separate studies by University of Western Ontario, London Metropolitan University and Queens University, Belfast have all examined whether there is a link between the 4Cs Mental Toughness Concept and the Dark Triad.

And there IS and it’s both interesting and valuable. 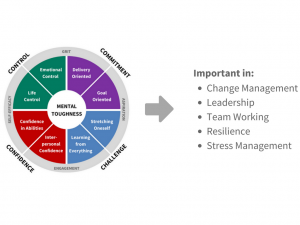 The study also suggested that there was an adaptive relationship with Narcissism, which moderated the undesirable aspects, producing a more socially aware Narcissist – a “nice” narcissist if you like?

There was a small link with Machiavellianism although most of that correlation was with the Control and Confidence elements of the 4Cs model ,which suggested that Mental Toughness might be factor in Machiavellianism where the goals are the individual’s personal goals.

The London Metropolitan study explored the relationship between the Dark Triad of personality and job performance, and investigated the mediatory role of mental toughness.

The need to understand this relationship is of importance to Organisational psychologists and practitioners who are responsible for selecting and developing employees. This study suggests that moderate levels of narcissism predict relatively lower performance at work than higher or lower levels respectively. Furthermore, the study suggests that this relationship is fully mediated by mental toughness!

Finally research at Queens University, Belfast (Papageorgiou 2017) generally concurred with the Western Ontario findings and concluded, “these findings suggest that developing Mental Toughness could facilitate the development of the adaptive—rather than maladaptive—aspects of narcissism.

Studying the joint manifestation of narcissism with Mental Toughness, and in relation to other personality traits, can have implications for eliminating the negative impact and increasing the positive effects, that people exhibiting higher levels of these behaviours have on themselves and on the society”.

So … an understanding of Mental Toughness and the ability to assess it accurately in others seems to be of some importance and value for those engaged in Organisational Development, Leadership Development work, Talent Management and especially those engaged in Coaching Senior Executives.

Narcissists are often thought of as individuals to avoid. However a study published in 2010 in the British Psychological Society Digest found that their presence can have a beneficial effect in creative team work. When groups of four people were challenged to come up with new ways for a company to improve, it was the groups with two narcissists in their ranks who performed the best. The suggestion is that the presence of some narcissists helps generate healthy in-group competition.

As ever, getting past a superficial understanding of a topic is often important.

Thanks Doug and back to me now. This interesting research reflects our own anecdotal experience at Mental Toughness Partners where the characteristics of some people at the top end of the MTQ48 mental toughness scale may reflect some of the Dark Triad. They may be too mentally tough for the positions they hold and this is especially evident in leadership roles where their supreme focus, drive for results and selfish obsession can achieve the required outcomes but bruise and disengage those people around them.

The MTQ48 tool measures mental toughness and provides insights into whether the upper reaches of your organisation is populated by psychopaths, narcissists and the machiavellians.

For more on mental toughness and MTQ48 contact us.