There is no one better able to describe the differences and the relationship between the MTQ48 framework and the big 5 personality test than mental toughness rock star and Managing Director of AQR, Doug Strycharczyk, which he does below.

Both the Mental Toughness MTQ48 4C’s framework and the Big 5 personality model describe elements of personality and do so from two different perspectives.

There is now a long history of organisations using the Big 5 framework and Big 5 based personality measures to predict behaviour in people and groups – especially when they are new entrants to an organisation.

At the point of recruitment (and selection for new roles), the prospective employer often knows little about applicants and much of purpose of the recruitment process is normally designed to select individuals who are good fits to the role and the organisation in terms of their behaviour. Undoubtedly useful, there is value in objective and verifiable sources of this information but it also has its limitations.

It’s equally important to understand something of an individual’s attitude and mindset.

The Big 5 framework is a behaviour based personality concept, which describes how people act when confronted by events. Many argue that it also picks up – in the Emotional Stability scale – how people respond emotionally when something occurs.

The Mental Toughness framework is a cognitive personality concept ,which describes how people think when something occurs or when they anticipate its occurrence.

The link between the two is that a significant proportion of “how we act” and “how we react emotionally” is in fact explained by “how we think”. In other words, the 4Cs concept, useful in its own right, helps to explain why we act and why we respond emotionally the way we do. 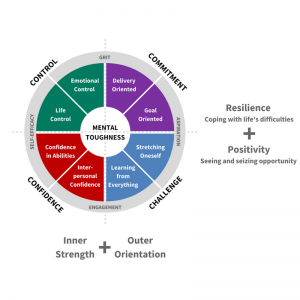 The 4 constructs of Mental Toughness, the 4C’s of Control, Commitment , Challenge and Confidence, contribute in different weights and proportions to each of the Big 5 factors. The different elements of how we think contribute to each of these aspects of behaviour. So they do not necessarily align “one for one” with each other’s constructs. However, it is also possible to see that, in most cases, each of the 4Cs is particularly significant with a particular component of the Big 5 Model.

Ultimately the strengths of the Mental Toughness constructs are that they focus on the way we think and help us to understand behaviour in an important and valuable way.

For a more rounded understanding of the individual it is hard to argue against understanding and assessing both behaviour and mental toughness (Mindset). That has to improve decision making whether for recruitment and selection or for individual and organisational development.

For more on the big 5 personality test and mental toughness, contact us.